Newsroom diversity has gotten new urgency since the Black Lives Matter protests due to the killing of George Floyd. Inclusive journalism is a common thread in my career in media. Being a white female journalist, I’ve learned the importance of educating myself on the topic of systemic racism. I notice how much the Global North (where I’m from) can learn from the Global South if it’s about diversity, inclusion and equity. Therefore I’m interviewing journalists and media entrepreneurs who either work in or together with countries outside of The West. To learn from their approaches and insights.
First in line: Alan Soon, co-founder of The Splice Newsroom in Singapore.

We’re almost at the end of our conversation when Alan Soon sums up what we’ve been talking about in one sentence: “If you look at the last three months alone, we’ve had COVID-19, we’ve had Black Lives Matter, we’re heading towards a big election in the US, Singapore is having an election on July 10; a lot of these things are just spinning and if we’re all at home and we’re all looking at Facebook, we’re all on social media at the same time, all this stuff is really killing our soul.” He feels burned out by the news cycle but as a co-founder of Splice Media, Alan experiences the COVID-19 crisis not only in negative ways. He talks about the necessary changes that are finally taking place in the media industry, especially on the topic of inclusive newsrooms. He and his co-founder Rishad Patel expect more media startups to emerge from this crisis, which is exciting for them as their mission with Splice is to ‘drive radical change by supporting bold, forward-looking media startups in Asia’.

I’ve spoken to Alan Soon several times before over the last one and a half years, about Splice Media’s first industry festival Splice Beta in Chiang Mai last year, about innovation in media in Asia and this time about the topics of mental wellbeing and inclusion, which turned the conversation in the most personal one so far. 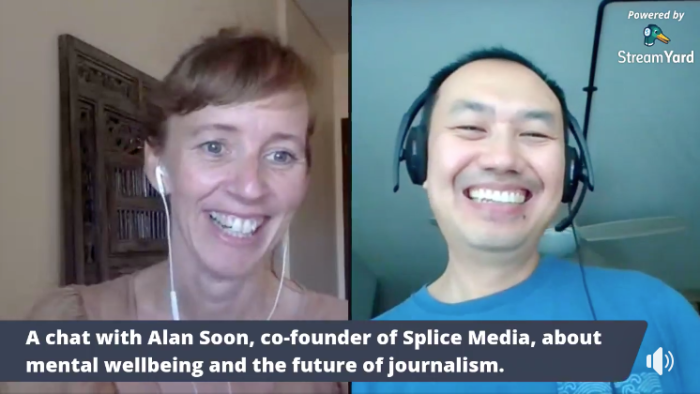 The level of empathy with each other has been useful
Five years ago he decided to quit his managing editor job at Yahoo to start Splice Media, working remotely from his home office. Alan has been working over twenty years in newsrooms around Asia in different fields from radio to television and from magazines to online. Even though remote working wasn’t new to him, the COVID-19 crisis did bring challenges to keep productivity on the same level as before the lockdown hit his hometown Singapore. “When we were just about to go into lockdown here, I made the promise to myself that I would make the most out of the situation. It was very easy at the outset to get very depressed over what was going on, and a feeling like ‘oh no we’re stuck’. But also kind of looking and going ‘this is not as bad as it feels’. We are obviously in a very privileged position, living in Singapore for one, having access to medical healthcare if needed, but also in terms of flexibility with our jobs at Splice”, he explains in our online call.  Alan and Rishad started organizing Splice Low Res. sessions for their community of media entrepreneurs in Asia. The last edition of this webinar series was about diversity in the media, with Indian women only media company Khabar Lahariya. Bringing people together to share knowledge is what Splice Media does best, as Alan also defines the crisis along the lines of community: “The good thing is, for the first time this generation, we actually have an event that all of us share in common. People no matter where they are going through the same thing. The level of empathy and just be able to empathize with each other around the world, I think that’s been useful.”

Media diversity in Asia should focus on languages
The COVID-19 crisis has put the media in a pressure cooker of digital transformation. Alan: “It’s like we’ve all gone on a 3-month crash course on how to work from anywhere. This is a crash course that has strapped the entire industry. We’re going to see a lot more newsrooms being comfortable working remotely with just simple online tools. Not just in a way they interview people and source for information and content but also in the way that they hire people. Because now you can hire someone from the next town that you live in without ever wondering if you can make it work because now we all know we can. The result of that is that we should be seeing newsrooms being more diverse. We should also be able to start hiring physically disabled people because they don’t have to get into the office anymore. So we have a whole bunch of opportunities.”
As a former reporter, producer and managing editor in different newsrooms around Asia and as a speaker at international media conferences in Europe and the United States, Alan experienced the lack of inclusion in media in different ways, professionally and personally: “There is obviously a lot of space for more diversity in terms of gender. In countries like India for example, it is extremely male-heavy on top of the leadership ranks. We’re seeing interesting kinds of dynamics across. In the Philippines, you have the complete opposite end of it, where most newsrooms are run by women. In Indonesia you see a lot of young people come up as well. For Splice, we’re always excited by that because we always believe that digital is where a lot of these underrepresented segments, whether it’s gender or whether it’s ethnic diversity, are able to leapfrog. In the US there is a lot of conversation around local community news, which tends to be geographical, I think in Asia that conversation needs to be around languages, we don’t see enough language-specific media companies across the region. And when you look across a region as big as this, we’re talking about thousands of languages serving millions of people. It’s not just a geographical problem, it’s a language problem. If we can solve that or see that being solved, I think that would be amazing.
I’ve seen a huge range of different newsrooms, every newsroom has some kind of diversity problem, there is always room for more. This is where the internet thrives. Anything digital allows you to create very specific, very niche audiences that you couldn’t have done with the mass media model.”

Tired of being the only Asian at conferences
With regard to the Black Lives Matter movement, Alan points out how the lack of inclusion in Western media has an effect on the global perception of Asia and Asian people like himself: “What gets to me is how big news organisations parachute basically westerners into Asian countries to tell very simple stories, that are usually related to elections or protests, the Hongkong protests for example. The question we should all be asking is why that still exists, why do we still parachute people in to tell a Western point of view? These are big global media companies but that seems to suggest you couldn’t find talent locally to help you tell that story. Which would be a far richer story because it’s explained by a local. I still see a lot of that and that frustrates me because there is just no excuse for that anymore. There is enough talent out there, you just gotta go look for them. It’s frustrating because as an Asian I don’t see enough representation in global media. The reverse would be unthinkable. Like for an Asian to represent European affairs to a European audience, you would never ever imagine that happening. And yet the reverse is acceptable, which is baffling to me.”
The lack of representation of Asia is also visible in the media conferences being held in the Global North. Alan gets frequently invited to those events as a speaker and often feels weird walking around: “I’m tired of being the only Asian at conferences, there is no reason why you can’t find more speakers out there, who have far more interesting things to say than I do. And who represents a far more diverse country and a bigger one than I do. That’s a change that I would want to see. Because I think it’s really important. Very often the response is, we don’t know many Asians, which I’m like ‘ok…how hard is that?’”, he adds with a surprised laughing face.

At the forefront of trying to drive change
It’s one of the things he and Rishad care about, to make sure that their platform shows figuratively and literally that there is more going on in the media space: “If you look at our website and the content that we have, it’s all geared towards people looking at Asia and asking the questions ‘Who can we invite?’, ‘Who is a good media startup from Indonesia or Taiwan that we could invite?’”.
After quitting Yahoo five years ago, all the lessons learned from working in legacy media, all the ideas, the thinking and emotions are coming together in his own business. He describes the final days of Yahoo as an incredibly difficult time in his career because he had to lay off people he had hired before. “It wasn’t just stressful but also an emotional rollercoaster.  The feeling that you had to go and tell your friend ‘hey, unfortunately, I had to lay you off because we messed up our strategy’ was probably the darkest moment of my professional career and that was also why I decided I was no longer going to find a job in a big corporate newsroom. I didn’t believe in these types of jobs anymore. I’d rather be at the forefront of trying to drive change than to be the guy who lays people off because we couldn’t change as a company.”

If social media engagement goes up, outrage also goes up
There still is stress sometimes in his life though: “I’ve been staying away from Facebook, from Twitter, I give myself regular breaks from these things just because it’s just too much. There is just so much anger that’s out there. It’s toxic to our energy levels, I think that’s worrying.” He mentioned how our souls are getting killed by all the negativity happening on the social media platforms nowadays: “The heart of this is how the algorithms work at these social platforms, everything that people are liking or commenting or sharing, these things are the ones that drive the algorithm. And that’s why everything in front of us is some kind of outrage. Which to me is just dangerous.”
As always, Alan finds a positive side to things as well: “The funny thing is, I really think that, if you think about it, racial inequality, racial issues in the US have always been there. This has always been something that’s been part of American history. But this year was the year where it finally made a difference. We’ve seen similar protests going on around the world, all of us are having the same conversation, all of us asking what it means for us. So I think that’s interesting and I think that would not have happened if not for the fact that we were all at home stuck, watching our social media feeds, more than ever. If social media engagement goes up, at the same time outrage also goes up on the same level. I think that’s something to be conscious of.”